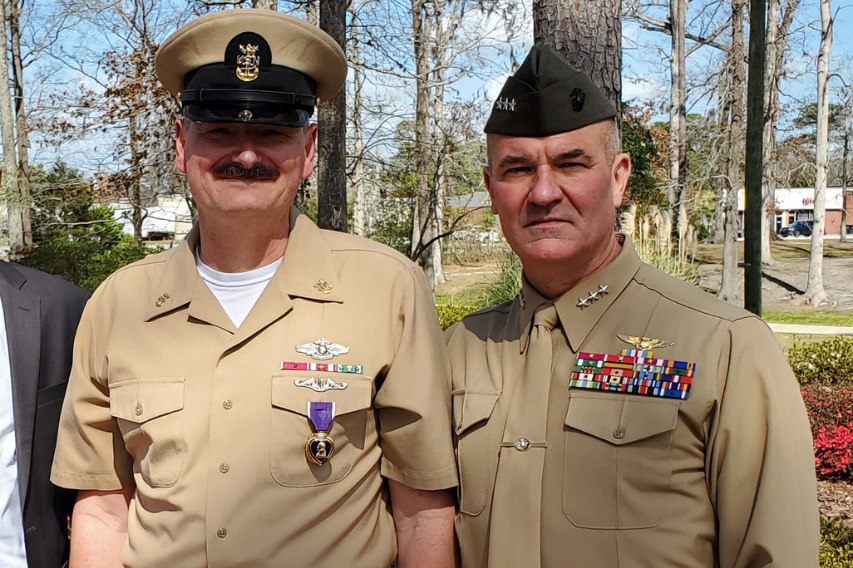 ❮ Back to Newsroom

In September 2004, Hill served as Chief Hospital Corpsman at Forward Operating Base Kalsu, Iraq. He was wounded while simultaneously leading his team and attending to casualties.

The Purple Heart is a U.S. military decoration awarded in the president’s name to those wounded or killed while serving on or after April 5, 1917. Its forerunner, the Badge of Military Merit, which took the form of a heart made of purple cloth, was initially established by General George Washington in 1782. The modern Purple Heart holds the distinction of being the oldest award still presented to service members.

After retiring from the Navy in June 2020, Hill soon joined QTC to advocate for Veterans as the Associate Director of Operations for Provider Management & Operations. He’s currently spearheading and growing our provider-employee network of medical professionals.

“As a Veteran myself, it’s an honor to work alongside employees like Chris,” QTC CEO Larry Schafer said. “His dedication and loyalty carry into his current work supporting Veterans as a mentor and a friend.”

Hill continues to be active in his local Navy community. He mentors up-and-coming leaders and is part of local U.S. Navy Chief Petty Officer Associations-Eastern North Carolina and Fleet Reserve Organization. Additionally, he consults with service members about the retirement process and adapting to civilian life.

“It’s an honor to serve active duty service members, Veterans, and all lines of business within QTC,” Hill said. “I’m able to pay it forward and support the military personnel of this great country.”

❮ Back to Newsroom