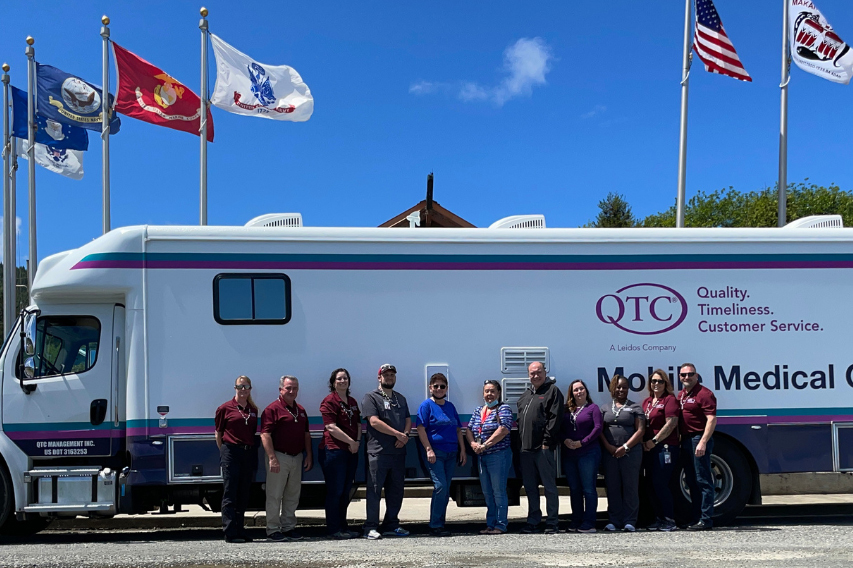 Over the past 40 years, QTC has performed medical exams for government agencies across the United States. They’re now averaging about nine hundred thousand exams per year with a specialty in Compensation & Pension (C&P) exams for Veterans Affairs (VA). QTC’s clinics and offices streamline the exams process for Veterans and other claimants nationwide.

But there are rural communities of Veteran populations who may have challenging commutes or may not have access to transportation. 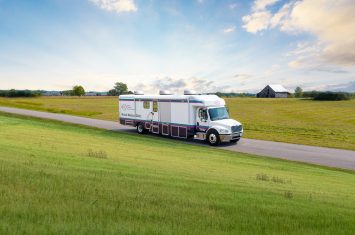 QTC is changing that by traveling across the country in their fleet of custom-built MMCs. Each MMC is outfitted with the necessary medical equipment for all kinds of exams, including radiology, audiology, general medicine, vision, mental health and other diagnostics. Operated by a handpicked team, the MMCs have the capability to go long distances and into underserved communities. The VA partners with QTC to process claims on the spot, reducing average wait times from 100 days to two weeks.

Their mission to reach underserved communities brought them to Washington, where they serviced Suquamish, Makah, and Lower Elwha Klallam Veterans.

QTC has driven their MMC to rural areas such as Alliance, Nebraska, but they needed to prepare a little differently this time. Federal agencies are not allowed onto Tribal reservations without special permission granted by a Tribal council. In the past, similar companies have tried to provide services on Tribal reservations but haven’t been granted permission.

As the largest provider of medical examinations for Veterans, QTC has learned that earning the trust of their partners is crucial. QTC’s Senior Director of National Business Operations Daniel Highland prioritized respecting the rules and land of the Makah and Suquamish. The QTC team collaborated with a Tribal Liaison to effectively communicate with each Tribe’s council.

Native Americans in the Military

Native Americans serve in the military at five times the national average. For over 200 years, they’ve fought in every major military conflict— from the Revolutionary War to ongoing operations worldwide.

Nationally, they have a higher rate of disability within the overall Veteran population: 36.4% compared to 26.2% of all other demographics. There are approximately 6,500 Native American Veterans in the state of Washington. However, many live far from a VA medical facility and have difficulties completing the exams required for disability claims.

Located on the coast of Washington, the Makah Indian Reservation is a five hour drive and ferry ride to the nearest VA medical facility. There is only one paved road that connects it with the rest of the state, and it has frequent mudslides and rainfall. Before the 1930s, the reservation was only accessible by sea.

The Makah know themselves as Qwi-dich-cha-at, which means “people who live near the rocks and the seagulls” in their Salish language. Beginning in World War I, they sent soldiers to serve in every major conflict of the twentieth century.

For this two-day event, the QTC medical team stationed the MMC near their town hall and Indian Health Clinic. There are no house addresses on the reservation, so the Tribal Liaison transported some of the Veterans to their appointments. As the team provided exams, the VA representative processed claims.

Tribal Elders hosted a dinner and ceremony to thank the team. An Elder sang a traditional song, and each Elder gave everyone a necklace of shells that are only found on the shores of their reservation.

“Knowing that was the first time they allowed anyone on their reservation made me feel honored,” said a team member.

The Port Madison Indian Reservation is home to the Suquamish Tribe. Their name is inspired by the Lushootsheed phrase D’Suq’Wub, which translates to “people of the clear salt water”. Located in the Puget Sound area, their people have a long history as fishermen, canoe builders, and basket weavers.

QTC set up the MMC at the House of Awakened Culture, a neutral community center where the Suquamish welcomed Veteran members of the Lower Elwha Klallam Tribe. At the House, they host celebrations, ceremonies, and cultural activities for Tribal communities throughout the region.

Tribal Elders and Council Members honored Highland, a disabled Veteran and nurse, in a sacred blanket ceremony. Often used for religious practices, trade, and gifts, the blankets are woven on wool looms. Blankets represent the Tribal nation and warmth of safety and trust. It is a custom for Elder women to wrap honorees in a blanket as a mother would wrap her son, and they did just that for Highland. They welcomed him and the QTC family to their home.

“Being able to lead a team in the first ever Tribal event in VA and QTC history was an incredibly humbling experience,” said Highland. “It was my extreme pleasure to have the opportunity to support the Native Americans of Washington.”

QTC is organizing future clinic events for various Tribes throughout Washington in concert with the Seattle VA Regional Office and VA Contracting office. Additionally, they plan to meet with Native American leadership in Montana about providing services in their state.